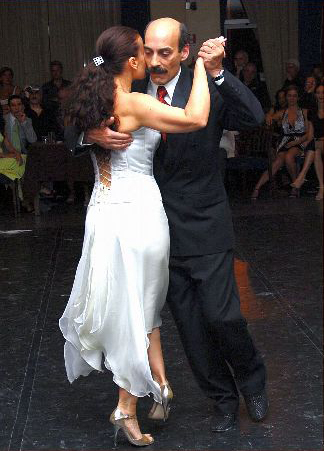 Started to dance with Gloria and Rodolfo Dinzel in 1993. She later taught at the Universidad del Tango de Buenos Aires and since March 2001 she has shared the directorship of La Academia at de Tango Milonguero with Susana Miller, where she gives lessons and seminars throughout the year.From March 2002 she danced professionally with Carlos Gavito, with whom she performed and taught workshops in Buenos Aires, as well as on tours and in festivals in Europe, Japan and Russia. With Gavito she performed innumerable times, including at the Palais de Glace in Buenos Aires, and the closing nights of the International Tango Festival organized by the Government of the City of Buenos Aires and the Congreso Internacional de Tango Argentino (C.I.T.A.) in 2003 and 2004. She continues to tour internationally, and has participated in festivals throughout Europe, Asia, the Pacific and the USA.Maria studied anthropology and her work in tango is characterized by research and teaching of the milonguero language, which she learned and still learns dancing in the best milongas in Buenos Aires, although these days she is also happily dedicated to being a mother.