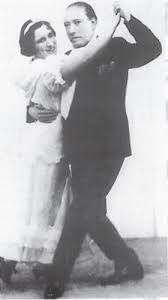 In those early tango ambiences, with strong uncured brandy, with thick and cheap tobacco smoke, with tough quarrelsome rivalry, women scarcely showed their presence through foreign whores —mostly French— or girls from the interior popularly known as chinas.

The Buenos Aires dance was born bastard, macho and in the outskirts, so women had to wait for a long time before they were able to pass through those forbidden doors as well as the prudish society of the period. But tango waited for them and at its Customs granted safe-conducts to the dancing muses that came to bring light to the new dance floors in dancehalls and clubs that displaced the academias, bailongos and cabarutes.

For that it had to supress the impudence of its movements, transforming them into an intimate, sensual, in retreat, substance that encompassed a community whose feelings were untransferable and where men and women shared a common passion. One and the other created while dancing to the music beat, the man leading, marking bars and steps, the woman interpreting the way of answering and enjoying with her body what the male dancer was suggesting. Continue reading.