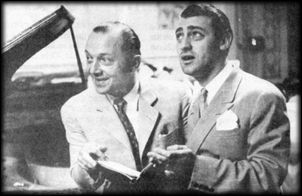 He was lucky to live, in his beginnings, in the tango ambience of the late twenties, to travel to Europe and take part of a bohemia that shaped him artistically. His orchestra was known either for the quality of its sound or the swinging attributes of its rhythm.

He started gigging with a group lined-up with his brothers, the bandoneon was played by Ricardo, on piano was Alfredo and on violin, Carlos. Their stints were at cinema theaters in the local neighborhoods. They earned one peso a day.

Later, in 1927, along with his brothers he joined the orchestra that Cátulo Castillo put together to go to Europe. Miguel Caló and Roberto Maida were as well members of it. They stayed in Spain for a long period and gigged in numerous cities. There they recorded several records for the Odeon label. The tour ended in 1930, but the Malerba brothers stayed in Europe. Continue reading at www.todotaango.com...

Ricardo Malerba and his orchestra appeared on the movie “La vida de Carlos Gardel” (1939), in which Hugo del Carril and Delia Garcés were starred, performing the tango piece “Noches de Montmartre” (start at 1:11:50).