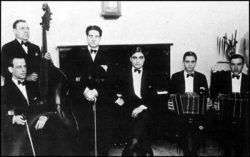 We arrive at a very important chapter in the artistic career of this great musician.

We place it in 1928, a period when the sextets blossomed.

This splendid outfit he put together is always remembered with admiration and nostalgia by the lovers of good tango.

The orchestra always evidenced a trademark of quality, with a special sort of slow beat full of tango colors, and a very hard to match richness of nuances. The crisis brought by the lack of work made this group disband. Continue reading at www.todotango.com… 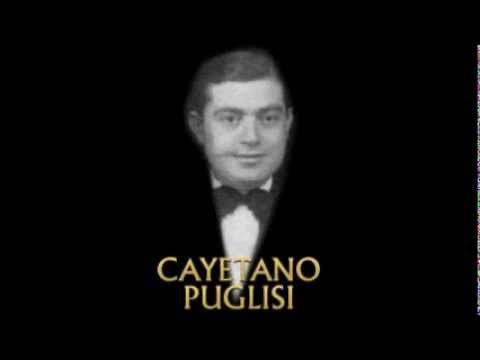 The eldest in a family of three musician brothers, Cayetano Puglisi was born in Messina, a region of Sicily (Italy).

Emilio, a violinist like him, of an uneasy spirit, after enjoying the sweet smell of success in the Buenos Aires orchestras, played in international orchestras, even in the far distant Teheran (capital of Iran). José, instead, from the humblest place in the teatro “Colón” orchestra of Buenos Aires, carried out his career devoted to violoncello, totally apart from tango life.

Cayetano Puglisi arrived in Buenos Aires in 1909. A violin student, he was alumnus of the maestro Pessina, seeming to become a great player of so difficult instrument. In his beginnings, inclined to classical music, after playing a concert at the Teatro Nuevo, the La Prensa journal granted him a scholarship to polish his studies in Europe, a voyage he was unable to make because the World War burst out in 1914.

By those difficult times, the riverside cafés at the neighborhood of La Boca witnessed his early gigs, although his formal memories as for the name of partners lead us to the famous Iglesias barroom on Corrientes Street, lining up a trio with Carlos Marcucci (bandoneon) and Pedro Almirón (piano), the latter replaced by Robledo, none of them was older than 13. It was a trio of kids. Continue reading at www.todotango.com...