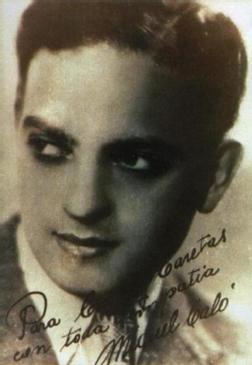 In the artistic history of maestro Miguel Caló we see two stages well differentiated that reveal his musical evolution and his gifts as great orchestra leader.

Even though his most transcendental success is related to tango in the forties, his work starts in the late twenties and is consolidated during the thirties.

His first stage began with the 1934 orchestra, in which we can appreciate a style familiar to Fresedo´s and a sound that reminds us of Carlos Di Sarli. Although he had put together other outfits before, these were reunited for certain occasions and were of little importance.

The orchestra in 1934 had Miguel Nijensohn on piano, who was to leave an indelible impression on the style of it forever, even after the forties. This instrument will have the responsibility of linking the musical phrases, with a timing and an ideal beat for the dancers. Learn more at todotango.com.

With Raúl Berón in vocals

With Alberto Podestá in vocals

With Raúl Iriarte in vocals

With Roberto Arrieta in vocals