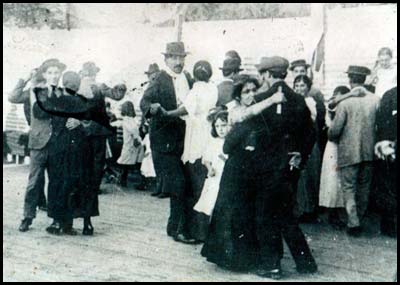 Popular dance or, simply, the milonga

This is a thing connected with urban music and, some decades before, was an activity to which boys used to devote rather long time because they regarded dancing as a spiritual channel and for many of them it became a joyful rite, hardly replaceable.

In the twenties and also partly in the thirties, the venues where people used to go to dance were: backyard dances, neighborhood clubs —where dancing reunions were held—, dancing clubs, dancehalls, tearooms and night clubs. Many of these places lasted up to the late fifties. Continue reading at www.todotango.com…