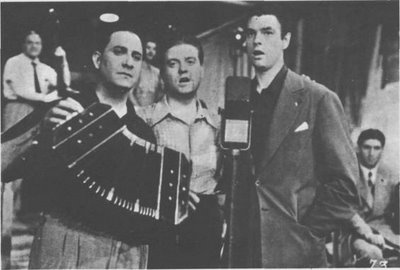 «A funny story took place at the opening of his tango “Al compás del corazón (Late un corazón)”. As soon as Federico joined Miguel Caló’s outfit he showed his tango to his colleagues and it was warmly accepted. The members of the orchestra wanted to play it, but the singers Raúl Berón and Alberto Podestá had doubts because they did not know the lyrics well yet. One day they decided to premiere it without Caló’s consent; a lark, a gaily mischievous action for the sake of fun. The leader was not used to go to the tearoom where they played in the afternoons. As the vocalists did not want to sing it, one of the most fervent enthusiasts of that tango piece, Enrique Francini, decided to do it. So was the improvised debut of this tango, with great public acclaim. The audience wanted to hear the piece again. When Caló arrived the public were requesting that the tune be played one more time. As he did not know what was about, he asked them to play it and it immediately was included in the book».Continue reading at www.todotango.com…