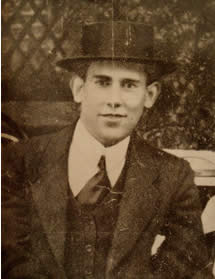 He was an important influence on the writing of tango lyrics, and in homage the famous instrumental tango “A Evaristo Carriego” was written by Eduardo Rovira, and recorded by Orquesta Osvaldo Pugliese in 1969.

He is buried at the Cementerio de la Chacarita in Buenos Aires.

Evaristo Carriego, a poet for the outskirts:

When his family moved to Buenos Aires, he lived on 84 (today 3784) Honduras Street, in the neighborhood of Palermo. From a very young age he frequented the literary coteries in Buenos Aires where Rubén Darío and Almafuerte were the important names.

He wrote for different publications of that time, like “La Protesta”, “Papel y Tinta”, “Caras y Caretas”, and others. In them he published his poems and short stories. He published his first book of poems, “Misas herejes”, in 1908 and his remaining poetical oeuvre was released after his death under the title “La canción del barrio”. Continue reading at www.todotango.com…