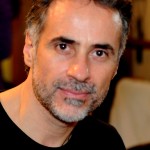 Néstor began his artistic career in the National Conservatory of Dramatic Art, where he worked with renowned professor Lía Sirouyan, who introduced the Jaques Dalcroze method in Argentina and developed a discipline known as ‘musical rhythm’.  For Néstor, this experience was essential to fulfill his need and desire to explore and express through movement the stimuli induced by music.   Néstor also took classes with Néstor Romero at the Center for Artistic Expression in Buenos Aires, and had lead roles in many theater and musical plays.

In 1989, Néstor was exposed to the choreography of Tango during the rehearsal of a play bases on the life of Eduardo Arolas.  This experience was pivotal in Néstor’s life, awakening his interest for Tango, a dance and music he feels is full of mystery and passion.  Subsequently, Néstor began taking Tango classes with some of the most celebrated Maestro Tangueros in Buenos Aires, and soon thereafter began organizing his own milonga ‘Los Mareados’.  In his dance studio, Néstor and Silvina Singer produced ‘Tango Project’, an effort aimed to analyze and solve the difficulties and problems faced by professional tango dance partners.  While Néstor has worked, and continues to work, with the great Maestro Tangueros he believes that his everyday experience working with dancers at his studio is what most enriches his experience; since “students, with their eagerness to learn, are the main protagonists in developing expression through movement”.

As dance instructor, Nestor sees his role not as a teacher, but rather as a coach that encourages its students to search and propose alternatives to express with their bodies in motion.  Nestor’s focus is to work on gaining awareness on posture and the points of support when dancing.  To gain this awareness, Nestor has his students work in a multitude of exercises that emphasize breathing, walking, awareness and sensitivity of the axis (your own, your partner’s, and the couple’s axis), the lines of energy, disassociation in movement of the lower and upper body, and moving in synchrony with the music.

In 2011, Néstor and Marcelo Solis found they had a common interest and passion for developing a space to develop and promote the art of dancing Tango. Both coincide that Tango is one of the most beautiful, motivating and inspirational expressions of human relations (“In tango, we are a reflection of what we are, or want to be, in life”).  Their talks shaped the formation of the Escuela de Tango de Buenos Aires (ETBA), a project that came to fruition on March 19, 2012.