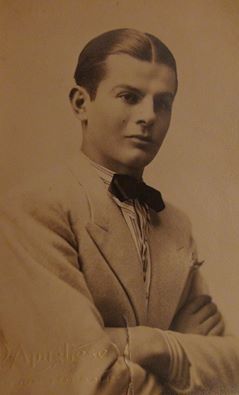 A lyricist essentially poetic, sensitive and prolific, José María Contursi created a great number of hits. His huge work reveals a creator of even inspiration, careful and experienced though somewhat reiterative in his themes and only exceptionally original and truly daring. This prevents him from being among the supreme authors although some of his lyrics deserve to be within the most consummated of the genre. In fact, he aided, as few did, with his refined language to raise the average quality of the tango canción ( tango with lyrics to be sung ). He conceived numerous celebrated pieces in collaboration with various of the best composers, who saw in him a crafted lyricist, whose verses always produced the appropriate mood. His first known work, the waltz “Tu nombre”, dates from 1933, almost 20 years after his father Pascual Contursi, gave birth to the tango canción on some little Montevideo nights.
Pascual had died mad in 1932 and the brothel stories of his lyrics no longer interested the new popular poets. These did not care for the social chronicle which had been their major interest in the previous decade, and they turned to sentimental affairs, in general about frustated love towards which the heart returned time and again. And this was the territory almost exclusive where Katunga Contursi roamed, always romantic, sometimes melancholic, sometimes impetuous. He did not make use of lunfardo ( he liked more terms like rain, ennui, halitus, brightness, fog ) , and it was strange that he chose a verse for the neighborhood description.
So faithful he was with this poetic attitude that he married the heroine of one of his most popular lyrics: “Gricel” ( music by the piano player Mariano Mores ). In these hardly fairly good verses from 1942 ( he considered it his best tango, but it is far from being so ), Contursi is sorry for having seduced and forsaken a girl, and cries in grief, in love with her much later, because in the meantime he forgot her. In the real life, this melodrama ended when Susana Gricel Viganó married her sentimental executioner. José María Contursi provided the abundant product of his inspiration to the demand of tango canción which took place for about two decades after the late 30s. The critical role of the singers in the orchestras urged a repertory designed for them and adjusted to the tastes of the age. Continue reading.